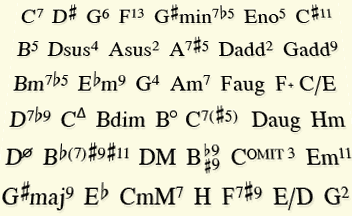 There are many chord names and symbols. The most of existing names, symbols, suffixes and abbreviations will be explained in this guide.

The first part of a chord symbol consists of an uppercase letter, which indicate the root note in the chord. There are seven different letters: A, B, C, D, E, F and G. A chord in root position is named after the bass note, but there are possible to play chords with alternative bass notes. This is indicated by a slash between the letter of the chord and the alternate bass note (e.g. A/D).

You may also see the letter H, which can occur in among music notations in some countries and is the same as B. Hm (H minor), for example, is identical with Bm (B minor).

Numbers in chord names relates in general to scale degrees. It is easy to misunderstand the numerals and believe they stand for the number of notes sin the chord, for example, which is not the case.

Very often the number indicate an extended note to a major or minor chord. The Cmaj7 chord, for example, is a C minor chord extended with the seventh tone degree in the major scale (B).

The same is true about chords such as C6, C9, C11 and C13, in these cases the sixth, ninth, eleventh and thirteenth tone degrees respectively are added to the chord.

There are also some exceptions from this. The chord B5 is instead telling us the chord only consist of the root and the fifth – another name for this chord could be Bno3.

The number four occurs mostly together this sus and tells that it is a suspended fourth chord. Sometimes a chord is written without “sus”, as in F4, and this is short form for the same thing (i.e. sus4).

Another case is chords with the number 2. In some cases, a chord is written as A2 etcetera. That indicates either Asus2 or Add2, which often include the same tones.

The abbreviations and suffixes

Many chords are written with abbreviation, or suffixes. This is useful by many reasons, not at least to reduce that taken space in musical notations (to reduce space even more, symbols instead be used – see more about this below).

“Min” or only “m” (a less common suffix is “mi”) is one of the most used abbreviations and stands for minor.

“Maj”, or less common, “M” is short for major (even less common is “ma”). In major triads, however, the letter stands for the most alone.

Much more infrequent are the combinations including both minor and major. CmM7 indicate such a chord.

“Sus” stands for suspended. The sus suffix is normally followed by a 2 or a 4, which indicates a suspended second or a suspended fourth, respectively.

“Add” stands for added. Add are normally followed by a 2 or a 9, which indicates an added second or an added ninth, respectively.

There are more abbreviations that could occur, and it can be good to know the meaning behind them even that they are rare and not a priority to learn.

A chord can be written as Eno5. In this case the name tells that the chord is an E major triad without a fifth. In other words, the chord consists of the rote and the third. Besides “no5”, “no3” can be used and are subsequently indicating that it is a chord with the third.

The signs and symbols

There are quite a few symbols in music that are important to know the meaning behind.

The sharp and flat signs

The sharp (#) and the flat (b) are the two most common symbols. These are mostly positioned directly after the first letter in the chord name, but can also turn up on other places in the name.

The plus and minus signs

The plus sign can by the way also indicate an augmented chord. F+ is therefore the same as Faug (the background is that the augmented chord consists of a sharpened fifth).

A second meaning of a minis sign could be minor, yet this is far from common.

The triangle and the circles

A small circle in the form a degree symbol is used rather often and tells that it is a diminished chord. Therefore, B° is the same as B diminished.

A circle that is bigger and has a diagonal line struck trough tells that it is a half-diminished chord. Therefore, Dø is the same as D half-diminished.

Other signs and symbols

Parentheses are sometimes used to make a chord symbol clearer. For example, C7(#5) could also be written C7#5, but the parenthesis makes indicate that the chord is firstly a C seventh, but with a sharpened fifth.

A slash is in some context common and tells that the chord is played inverted or with an alternate bass note.